Blown Away: Lincoln City OR

On a recent trip to Salishan Resort, my friend and I went into nearby Lincoln City where we wandered into the Jennifer Sears Glass Art Studio.

It's an interesting place where you can blow your own glass objects, including simpler pieces like floats and paperweights, and more elaborate items like sea creatures and bowls. It looked like fun, but at $65 for a float (the entry-level piece) we decided to observe rather than participate. 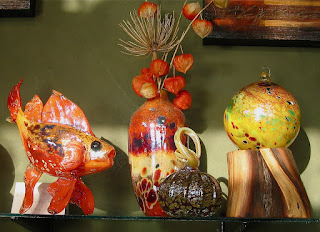 There was more glass action across the street at Volta Gallery, where the artists in residence from the Jennifer Sears studio sell their creations. I was most intrigued by a glass hammerhead shark, which was in striking contrast to the cuter, more colorful pieces in the gallery. I thought it was just plain cool – although I'm not sure I'd want it staring at me at home. It did, however, give a whole new meaning to the term "glassy-eyed." 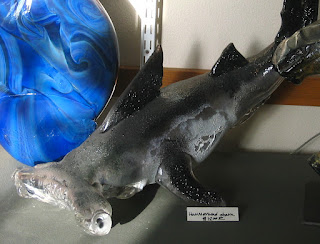 Get Your Groupon: Salishan Resort,
Gleneden Beach OR

Remember when “impulse buy” meant you actually had to walk into a store? Now, thanks to sites like Groupon, enticing retail-therapy offers get dumped into your email box daily. Call me a sucker, but an e-coupon for a $129 one-night stay at Salishan popped up and I bit. The next day I had a vague sense of buyers remorse, as I thought, “Hmmm … Salishan – isn’t that some kind of corporate retreat/spa/golf kind of place?” But too late. I had clicked. 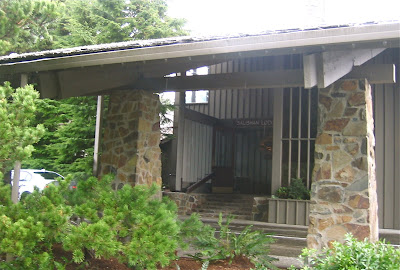 So, in late February, a friend and I headed out to the Land of Salishan, coupon in hand. Not really knowing what to expect, I was pleasantly surprised that the resort was not nearly as slick as I anticipated. It's more like where Mid-Century-Modern meets macramé. There’s the discreet '60s entrance, and room décor dominated by '70s earth tones. As described on their website, Salishan is “entirely unique from today’s minimalist urban design.” I’ll say!

Since it was the off-season, and a wet and windy winter storm raged, no nature walks to the beach this time. We did, however, partake of the dry sauna and the pool.

Another highlight was dinner in The Attic bar. Not so much the food (which was mediocre at best) but the entertainment. That evening, the Beth Willis Rock Duo performed and they fit right into the Salishan groove. They covered classic rock hits from the '60s to the '90s, and their playlist felt dated in the same comfortable way as the resort. I confess – it was fun to bob my head along to familiar tunes from back in the day. Plus, that Beth can really belt it! 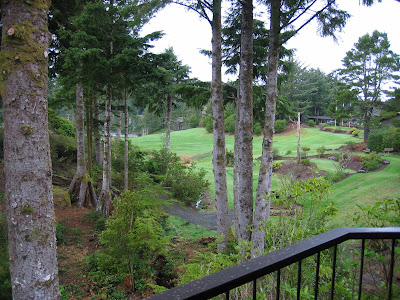 Now, is Salishan the hippest place to stay on the Oregon Coast? Probably not. (And I’m not sure where that place is – and it’s probably not available through Groupon.) But in the end, I did come to appreciate it, mainly because the original owners seemed on the forefront of the “eco lodge” movement. (And for 1965, that was pretty far ahead of its time.)

Plus, this '60s/'70s throwback resort does manage to reflect the quirky, low-key, natural beauty of the Oregon Coast.