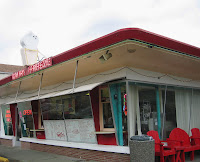 Portland is more like a town than a city, and in this neck of the woods, six degrees of separation is more like two. That’s how through a mutual friend I came to know Pam and Will Levenson, owners of Popina Swimwear. Truth be told, I was eyeing Popina’s well-designed, retro-inspired swimwear long before I met this dynamic duo. Cruising through one of their stores or surfing their website will make even the most swim-wear adverse want to buy something. 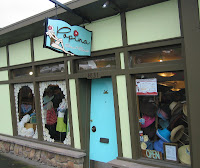 Ladies – I HIGHLY recommend checking out Popina. The suits are adorable, and thanks to Pam’s exquisite design skills, they have a certain classic modesty that personally, I find very appealing. Plus, the sporty, amphibious designs lend themselves to both aquatic and non-aquatic activities.

In particular, I absolutely LOVE the Popina swim skirt, and finally purchased one. It’s so stylish and versatile. You can pull it over your suit – or heck – just swim in it! Ladies, in my humble opinion, the swim skirt has the potential to banish the cellulite conversation forever. I can already picture myself proclaiming, “Yes, waiter, I WILL have the Fettuccine Alfredo. Bring it on, because I’ve got a swim skirt!” 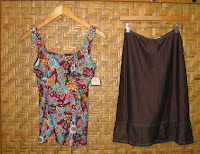 Besides the array of suits and swim skirts, other stylish items found at Popina include adorable, high-quality flip-flops, and bathing caps dotted with flowers (the kind mom wore in the pool while doing the breast stroke, remember?) It’s true ... everything you’ll need for that Caribbean cruise (or maybe just a trip to the local beach) is right here.