A Sunday Drive: Canby OR

Part 1: Dahlia Dalliance
One drizzly Sunday in July (summer had taken a hike) I decided rather than stay home and curse the skies, to take a drive. My semi-aimless trajectory led me to Canby, Oregon where I happened upon Swan Island Dahlias. According to their website, Swan Island Dahlias is the “Nations Leading and Largest Dahlia Grower”. Who knew? 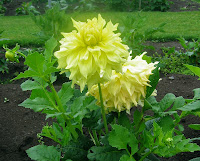 I wandered through the rows where the blooms were just starting to kick in. Very nice, but by far the most entertaining thing were the names of the plants, which included “Hot Cakes”, “She Devil”, – and get this – “Blah Blah Blah”.

I paused to ponder the true meaning behind the Blah Blah Blah dahlia, then scraped together a few bucks, paid honor-system style for a bunch of the big, luscious flowers, and set off.


Sunday Drive Part 2: Magic Ferry Ride
After leaving the dahlia zone, I saw a cute little sign for the Canby Ferry, which I heard about but had never experienced. And people, let me say this: it’s things like this that make Oregon great. I mean, it’s not many places that you can just stumble upon a ferry from the early 20th century (1914 to be exact). Really, it’s a little slice of Americana that you actually can drive onto and ride. I know it’s a real functioning ferry – but it felt more like a big giant toy boat that takes you across a scenic corner of the Willamette. I’ll be taking this ferry again, and next time I’ll bring my parasol for the occasion.

A jaunt to Swan Island Dahlias topped off with a real ferry excursion was a great way to shake off the dreary weather. It’s also the perfect quickie site-seeing excursion for out-of-towners who want to experience something quaint.