I’m not really the fancy resort type, which is probably a good thing, because for the most part, I can’t afford them.

Having said that, far be it from me not to partake in a fancy resort when the chance presents itself. And so, during my last trip to the South Bay in LA, I took a tip from my sister (who has a nose for all things luxurious) and headed out to the Terranea Resort on the Palos Verdes Peninsula. Of course, this being LA, it's no surprise that this tastefully designed Mediterranean environment (with a vaguely eco-friendly feel) boasts an entertainment pedigree. It sits squarely on prime ocean front real estate that was once Marineland, where the beloved TV show, Sea Hunt, starring Lloyd Bridges, was filmed. 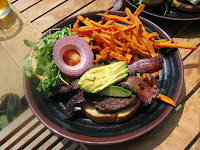 In fact, Lloyd Bridges’ character, Nelson, is the namesake of one of the lovely restaurants at Terranea, which has stunning views of the Pacific Ocean and tasty food. I went for the burger, which was nicely presented and satisfying.

Besides the restaurant, there are mini hiking paths that meander along the cliffs and the expected glamourous pool, spa and golf course. And let's not forget the golf carts that can take you to and from your valet parked car! (The ultimate “I’m at a real resort” touch in my humble opinion.) 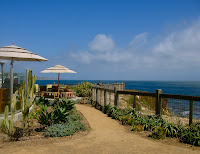 It’s comforting to know that in these lean times, if you can’t afford a ten-day luxe vacation, you can at least afford a luxe afternoon – all for the price of an upscale burger!


Wowee! June came and went without a post. (Shame on me!) A hectic month indeed, although I did manage to get out with the gals for a lovely bike ride along Portland’s Marine Drive. This well-known path is a favorite training ride for many. No stops for miles, so you can really stretch out and cruise.

OK, so nice ride. But for me, as with most rides, it’s also about stopping to refuel. After heading out and back to Blue Lake Park, we stopped at the Sextant Bar and Galley, which one could affectionately refer to as a dive. But what a great dive it is! Mainly because it has this terrific deck with quite the view of the Columbia River. And best of all, it’s fine to clomp in there all sweaty in your biking shoes and gear and no one cares. 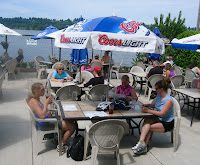 If you want to know about the food, it’s pretty much forgettable pub grub, so not much to say here. Except that one friend wisely requested “real" cheese on her nachos, instead of the kind that squirts out of a pump.