Near Beer: Portland OR

Boy, talk about not having to venture out too far for a good time. On this particular rainy afternoon, my friend and neighbor Amy and I wandered up to our 'hood – Beaumont Village – and found ourselves in Bottles, a recently-opened bar that specializes in all kinds of craft beer on tap, and of course, in bottles. (Duh!) 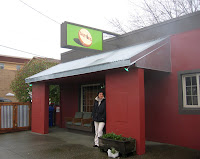 After bellying up to the bar, we were warmly greeted by one of the owners, Brant Kunze. While pouring Amy a tasty IPA and me a crisp Pilsner, he shared a bit of the Bottles story. Here’s the short version:

Brant and two of his buddies wanted to open a “nice” bar that served quality beer. The place would cater to not only bohemian hipsters, and not only the sports bar crowd, but to regular neighborhood folks (just like us!) So, they pooled their savings, ditched their apartments, moved into Brandt’s basement, and proceeded to do a year of “research”, which consisted of hitting almost every brew pub and bar in town. They studied the clientele and scoped out potential locations, taking copious notes and sampling copious amounts of beer along the way. 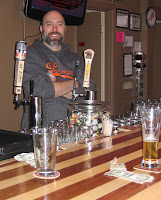 Out of their determined efforts, Bottles was born.

We were so taken by this success story that we just HAD to sample the food. We decided to go for it and order the “rib pile” (oink!) served with a side and some chips. And before I forget, did I mention the grill and the smoker out front? It's fired up Tuesday through Sunday, and produces pulled pork, grilled wings, as well as the smoked ribs. (Get um’ while they last. The grub runs out around 8:00 PM.) 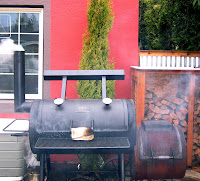 The smokin' smoker and grill

Two plates of ribs and two pints each later, we realized we had killed most of the afternoon at Bottles. Is there a better way to spend a rain-soaked Sunday? I think not.