One fine Sunday morning, my dear friend Kathleen (of Good Stuff NW fame) took me for a spin in her snappy red Mini Cooper, and we set out for the nearby Northern Willamette Valley. When folks head out this way, they often hit 99W – a popular highway packed with large commercial wineries. But we decided to take SR 47, the road less traveled, and that made all the difference.

Kathleen and her Mini
And what a charming road it was. Not much traffic, with a gently rolling landscape composed of farms and vineyards, and the occasional picturesque barn. Quite the pleasant Sunday drive – and only about an hour from Portland proper.

Being Sunday morning and all, we weren’t up for too much drinking, but we did check out the Carlton Winemakers Studio where you can sample several different artisan wines by local winemakers. And the space is lovely – open and airy and loft-like with lots of light. Plus, there’s a nice, spacious deck out back. If you plan ahead, you can bring a picnic and hang out all afternoon. 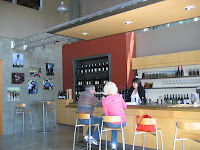 Tasters at the studio

One suggestion: If you do visit and want to do some serious tasting, make sure to bring your own snacks. When we were there, they didn’t have any bread or cheese on hand (which would of been nice, since this is wine tasting, after all). But we roughed, it and managed just fine without palette-cleansing treats.

After a bit of sipping, we hopped into the Mini and buzzed back to Portland lickity-split, and still had plenty of our Sunday left to savor.

It was a warm Saturday afternoon, and the long-awaited first true Spring day had arrived. EVERYONE was out and about. So, a friend and I took to the joyfully crowded streets in search of food.

We found ourselves in the Hawthorne District, and wandered past Por Que No, a tasty upscale taqueria that prides itself on authentic Mexican food. But on this sunny Saturday, it was way too crowded and the line was out the door. (Better to hit it on a weekday anyway, right before the lunch and dinner rush. The moles are great.) 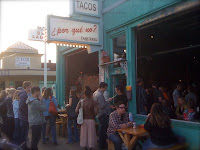 Although Por Que No was packed to the gills, as fate would have it – in a moment of Isabelle Allende-like magical realism – a humble Mexican food cart appeared across the adjacent parking lot, just in the nick of time.

Newly launched by husband and wife team Nestor and Christine, this food cart is part of a new food cart “pod” located on Southeast Hawthorne at 46th. The food was tasty enough, and easy on the wallet. (We especially enjoyed the eggplant tacos at $1.50 a pop.) 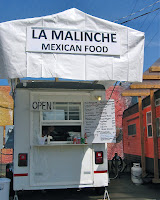 Aside from the cheap eats, the most interesting thing about this place was the name, which Nestor tells me was his wife’s idea. Apparently, it’s quite provocative by Mexican history standards.

Depending on who you ask, La Malinche, an indigenous woman that was a mistress of Cortes, is either a heroine in the same league as Sacagawea, or a complete traitor and a harlot. It’s a fascinating piece of Mexican lore, and worth a Wikipedia visit if you care to learn more.